how does the aerosol extinguishing agent work

The AF-X Fireblockers have a connector for the electrical control and activation mechanism of the extinguishing generators.

Once activated, the aerosol fire extinguisher and fire extinguishing systems initiate a reaction in which the released aerosol binds the free radicals of the combustion.

The aerosol generated by the Aerosol Fire Extinguishers and Fire Extinguishing Systems does not extinguish fires by using the methods of suffocation (oxygen removal) or cooling, but by stopping the combustion reaction on a molecular basis (by binding free radicals) without affecting the oxygen levels. 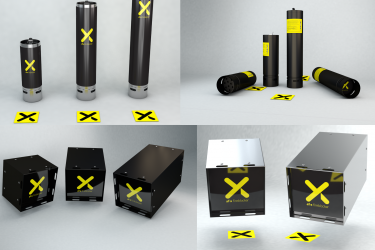 The aerosol is made of micro-sized particles. These particles are suspended in a gas, whereby the ratio between the exposed surface and the reaction mass is extremely high (so that the amount of active material required for quenching can be kept to a minimum). Particles of these dimensions remain in suspension for a relatively long time, allowing them to flow into the natural convection flows. This leads to an increase in the effectiveness of the extinguishing agent.

The extinguishing effect is triggered by two actions (Physical & Chemical):

The physical extinguishing action arises from the chemical-physical characteristics. Compared to all other elements, these elements require the least amount of energy for ionization (lowest ionization voltage). For this reason and because only a very small amount of energy is required, it is possible to separate the electrons from the atoms. The required amount of energy is provided by the abundance of energy present in the fire.
The ionization of potassium is evidenced by a light violet discolouration of the flame during extinguishing. The energy present in the flame is therefore reduced in accordance with the ionization voltage of the elements present.

During combustion, certain reactions take place in the flame in rapid succession between atoms and fragments of unstable molecules (radicals). Such reactions form the so-called chain reactions of radicals. Due to their unstable nature, radicals tend to reach a stable end state through even more reactions. The stable end products include carbon dioxide (C2O) and water (H2O). The potassium released by the breakdown of the potassium compounds reacts during combustion with the free radicals of unstable hydroxides to form potassium hydroxide (KOH), which is a very stable compound. At this stage, the free radical chain reaction is stopped and the flame extinguished.

The AF-X Fireblocker has been designed, developed and built in collaboration with Aerospace Propulsion Products B.V part of the ArianeGroup, a Joint Venture of Airbus & SAFRAN.

Certified, complies with and developed in accordance with the following directives and standards: