This month, in the section 360 ° of EVO FENEDEX, a visit to the makers of fire extinguishers who kills a starting fire with nanoparticles. 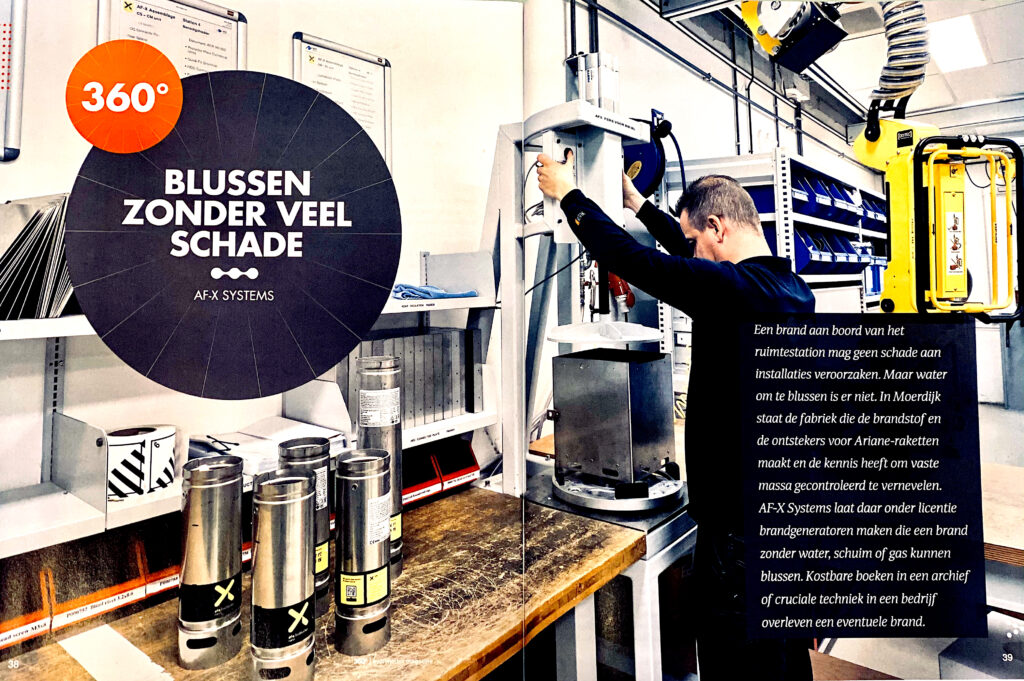 Rocket science to put out fires. In the industrial area of ​​Moerdijk, APP (Aerospace Propulsion Products) produces rocket fuel and detonators for rockets that are launched into space. Unlike vehicle fuels, rocket fuel is a solid material that converts electrically into gaseous form and provides thrust. The same principles can be used to suppress dust explosions or extinguish fires. For AF-X Systems, APP produces the AF-X Fireblocker, an extinguishing generator with a dry extinguishing agent in the core. In a fire, an electric igniter activates the reaction to convert the solid bound compound into a cloud of nanoparticles. These particles immediately block the reaction of fire. “A limited amount of extinguishing agent is needed to immediately stop a fire and limit subsequent damage. minimized, ”says Frank Butterman, within the team of entrepreneurs responsible for sales.

“The advantage is that with this aerosol a fire can be extinguished without losing products or installations. If you use water or foam, for example, you can have a lot of damage and cleaning up due to the extinguishing method. With our AF-X Fireblocker, damage is limited to the object that has been burned. In a shed where fertilizer is stored in paper bags, most of it can still be used as fertilizer after a fire, in a technical room the technology is not lost.

An installation consists of a compact extinguishing generator, smoke or heat detectors and an extinguishing panel. “We look at the volume of the room and the fire class and use this to determine the amount of extinguishing agent. We only need electricity to install it. Pumps, gas bottles and heavy pipes are unnecessary. Facilities for the collection and disposal of contaminated fire extinguishing water or foam are also not necessary. Good cleaning and ventilation after the fire is enough.” 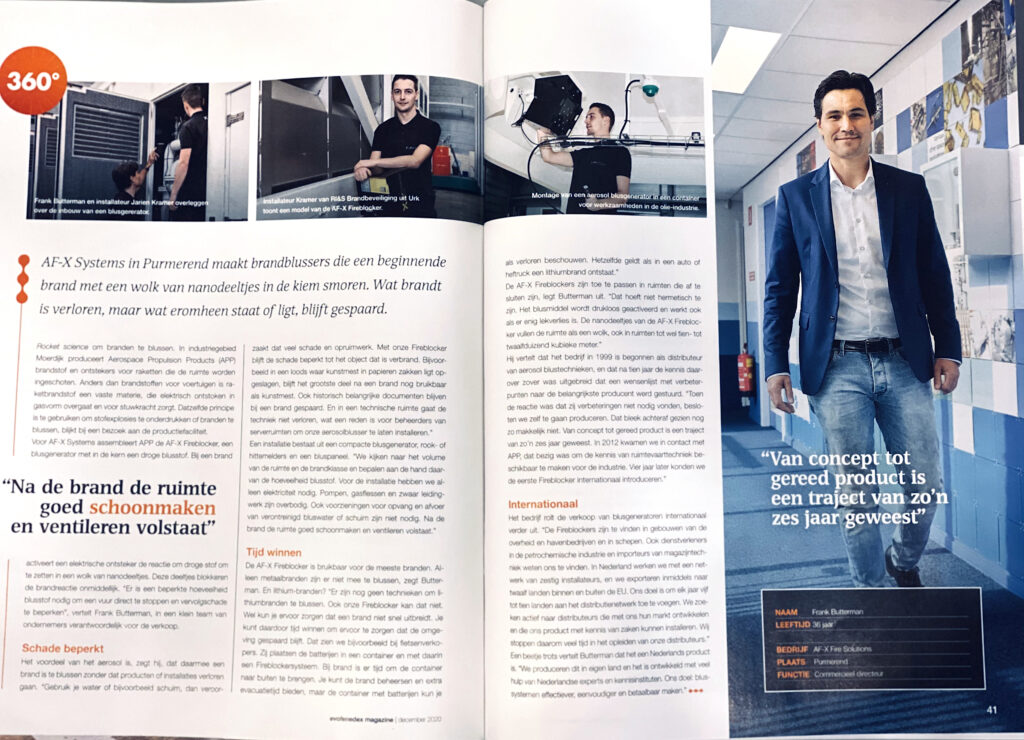 The AF-X Fireblocker is useful for many fires. Only metal fires cannot be extinguished with it, says Butterman. And lithium fires? “There are no techniques yet to extinguish lithium fires. Our AF-X Fireblocker cannot do that either. You can, however, prevent the fire from spreading quickly, control it and provide extra evacuation time, but if a lithium fire starts in a car, forklift truck, you can often consider it lost. So you can save time to ensure that the environment is spared. Bicycle sellers or rental companies can place the batteries in a container and with an AF-X Fireblocker system you are alerted, you can better manage that situation and limit the damage. He explains that the AF-X Fireblockers can be used in spaces that are not completely hermetically sealed. Because the activation of a generator is pressureless, the room may have leakage losses. The nanoparticles of the AF-X Fireblocker fill the room like a cloud and that can be done in spaces up to 10-12 thousand cubic meters.

Butterman says that the company started in 1999 as a distributor of aerosol extinguishing technology. After ten years, the knowledge had expanded to such an extent that a wish list with points for improvement was sent to the main producer. “When the response was that they felt no improvements were necessary, we decided to start producing ourselves. In retrospect, that turned out not to be so easy. It took about 6 years from concept to finished product. A Dutch professor developed the recipe for the solid extinguishing agent. In 2012 we came into contact with APP, which was working to make knowledge of space technology available to the industry. Four years later, we were able to introduce the first AF-X Fireblocker internationally.

The company is rolling out the sale of extinguishing generators internationally. “The AF-X Fireblockers can be found in government buildings, port companies and ships and are in talks with importers of warehouse technology. In the Netherlands, we work with a network of sixty installers and now export to twelve countries within and outside the EU. Our goal is to add five to ten countries to the distribution network every year. We actively look for distributors who develop their market with us and who can install our product with knowledge. We therefore invest a lot of time in training our distributors.
He proudly says that it is a Dutch product. “We produce this domestically and it was developed with a lot of help from Dutch experts and knowledge institutes.

– No fire damage;
– Easy installation;
– No structural changes and little maintenance;
– Not harmful to the equipment, people and the environment;
– Financially attractive;
– Long service life of 15 years;
– Rapid detection and extinguishing;
– Right at the source.

The AF-X Fireblocker has been designed, developed and built in collaboration with Aerospace Propulsion Products B.V part of the ArianeGroup, a Joint Venture of Airbus & SAFRAN.

Certified, complies with and developed in accordance with the following directives and standards: