A major disadvantage in this development is the fire risk of a lithium-ion battery. This has already had a significant impact on the transport and storage of lithium-ion batteries. IATA (International Air Transport Association), among others, is struggling with a major transport problem. You may have already experienced this yourself when checking in your luggage at the airport. Your devices with lithium-ion batteries are no longer allowed to fly in the cargo hold, but only in your hand luggage.

What is a lithium battery?

How lithium-ion battery (LiBs) works The cells that are electrically interconnected in the LiBs are made up of four components:

The active anode material contains carbon in the form of graphite. This is applied to copper foil. There are three types of anode materials: (artificial and natural) graphite, (hard and soft) carbon and alloys.

Cathode materials use lithium transition metal oxides. Herein lithium and the metals are the positive ions and the oxide the negative ion. 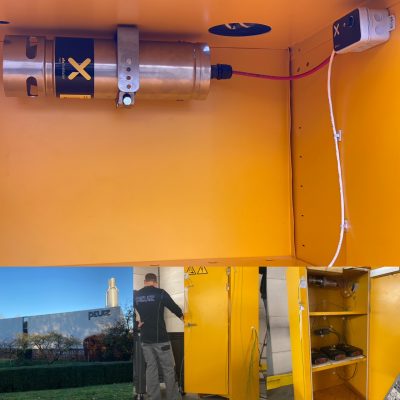 During the charging process, lithium ions leave the cathode and travel via the electrolyte to the anode. In doing so, they pass the separator. During discharge, the ions return to the cathode. The ion transport makes the electric current possible.

The separator is a porous membrane of polyethylene or polypropylene that separates the cathode from the anode and thus prevents short circuits. It is placed in the electrolyte solution.

The bursting of cells due to heating and ignition of the liquid electrolyte is the greatest risk of starting a fire. Too fast release of the stored chemical energy, due to a technical defect, also causes the release of thermal energy, which can cause a short circuit or the emission of electrolytes. The battery can then thermally runaway (thermal runaway), which is caused by, for example, this internal short circuit.

Because lithium in combination with water produces a highly explosive gas, conventional extinguishing systems that use water are not suitable for fighting a lithium fire.

These tests have been successfully performed and documented in collaboration with the Peutz fire laboratory. The extensive Peutz test report can be requested from us. Main conclusions that become visible in the report 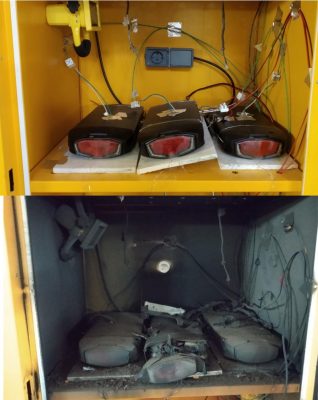 Extinguishing at the molecular level. In conventional systems, an element is removed from the fire triangle. The extinguishing effect of the AF-X systems is more intelligent. In fact, underlying a fire triangle is a fire pentagon.

The mixing ratios and catalysis also play an important role. At the molecular level, fire is nothing more than a chemical reaction. Unstable molecules float around within that chemical reaction. These unstable molecules are also called free radicals. When the AF-X extinguishing systems are activated, the aerosol mist directly links with these free radicals. The aerosol in turn provides stable molecular compounds. In this way, the fire is blocked in the very first stage without cold shocks, without water and without oxygen expulsion.

With our fire protection systems it is possible to control or extinguish the fire (on a small scale) without causing any damage to people, the environment and other materials and equipment present in the surrounding area. This limits possible fire damage for you.

Advantages of an aerosol extinguishing system